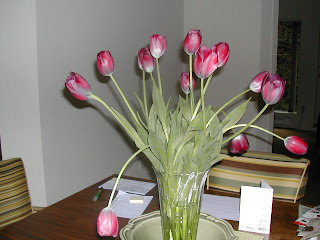 The P-Man bought me some beautiful tulips last week. Tulips are like a guest at a party. They start out sort of tightly closed, but after a drink or two, they sort of open up and start to stagger around, eventually falling over! It is very easy to cook for someone who brings you flowers. You just pick out an ingredient they'd like and go to it! I usually make a pretty traditional dinner for the P-Man. He gets up early everyday to go to the gym, and then works for another ten hours or so. When he gets home...HE IS HUNGRY!! We never usually have things like soup or salad or sandwiches for supper. He likes a full meal. In fact, when I want a break from cooking, all I have to ask him is if he would like mayonnaise sandwiches for supper? The next thing I know...we're at Vol au Vent! On my trip to Granville Island, the only thing I purchased that really appealed to me was a dozen bagels from Siegels Bagels, some lite Winnipeg cream cheese, and some Montreal smoked meat. When I got home, I doctored up the cream cheese a little by adding a chopped green onion, and a bit of red pepper, some black pepper, flat leaf Italian parsley, and a dollop of grainy Dijon mustard. I toasted two bagels, a poppy seed one for me, and a multi grain one for the P-Man. I then placed the smoked meat in a shallow dish with a splash of water, and covered it with a paper towel, and microwaved it for 30 seconds...essentially steaming it. When the bagels were nice and tasty, I mean toasty, I spread on a generous amount of cream cheese deluxe, and piled the smoked meat on top. I also made my James Barber inspired green bean salad, and added a few nice tangy, homemade pickled beets, courtesy of my dear friend from the Valley, A.S. Once I presented the plate to the P-Man...all I heard was the occasional, " This is GOOD!"
OY!!! I had to agree!
Posted by Cathy B at 1:20 PM