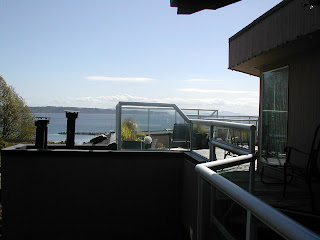 The P-Man and I woke up to a Victoria Day Monday, trying very hard to redeem itself. The skies began to clear, and a lunch at the beach seemed like the sensible thing to do. I just had to get a few cooking tasks out of the way.

I purchased a package of New Zealand lamb shanks. I had never cooked lamb shanks before, so it took me awhile to find a recipe I liked. I usually start my online recipe search at www.myrecipes.com They have compiled recipes from a variety of cooking magazines, my favorites being Cooking Light, and Sunset They also provide all the nutritional and caloric information. If I want to figure out how many points a recipe is worth ...It's no problem, and it helps me decide if the recipe is a wise choice for me. I had just cooked up a pot of turkey chili the day before, so I wanted something that didn't rely on tomato as the star ingredient. As I read through the recipes, I encountered a few roadblocks. I have no dutch oven. I had only 3 shanks, not 4...not 6. Finally, I wanted to get the recipe together with the minimum amount of mess, and or chopping. The winner was: Lamb Shanks with Lemon and White Beans. ( Cooking Light ) I had to make a few substitutions: 3 shanks, not 4. 1 small peeled, cubed butternut squash, no carrots. 1 bottle of Becks beer, no white wine. 1 cup low sodium vegetable stock, no chicken stock, and no parsley. I also didn't bother with some of the complicated finishing, ie: separating the fat, reheating, mashing 1/2 the beans etc. After browning the shanks, I removed them to my largest pot. I cooked the rest of the recipe in the frying pan I had browned the meat in, and then transferred everything to the large pot. The liquid mixture didn't quite cover the shanks, so I added the rest of the bottle of beer, and another cup or so of vegetable stock. I fiddled with the temperature until I got a nice slow bubble, and then headed down to the beach. The recipe said to simmer for about 2 and a half hours, but the patio at Slainte was packed, and our food took a bit longer than usual, but was completely worth the wait. The sun started to shine for real, with some heat to it, and when one glass of wine lead to another...and Jack came out to offer us a new cocktail he had been working on ...I would estimate the shanks were cooking for about 3 and a half hours, by the time we picked up some DELICIOUS gelato from Dolce Gelato...and headed up the hill.

The absence of fire trucks was a good sign, and when we opened the apartment door, all I could smell was yummy, meaty goodness. The meat had completely fallen off the bone, so I discarded them, and dumped the mixture into a bowl to cool. I had a quick taste, and it was creamy and super flavourful, with a deep' lamby 'flavour. It didn't seem to need anything in the way of seasoning, so into the fridge it went. Like the chili, it will probably benefit from a nice slow reheat.
Posted by Cathy B at 2:39 PM