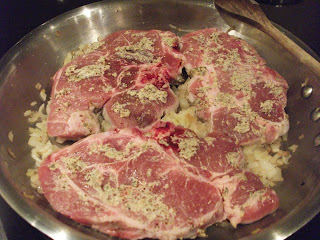 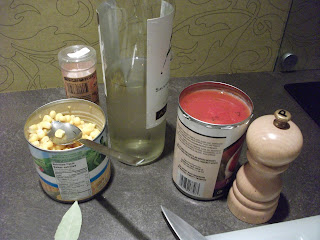 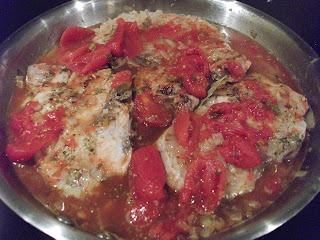 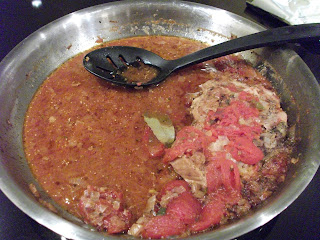 I believe that James Barber was being cheeky when he called these pork chops 'pretentious'. Nothing fancy about a $7.30 package of sirloin cut pork chops that would feed 3 people very comfortably. I made these pork chops in between Christmas and New Years. After we had returned from the Okanagan, and before I had gotten any groceries. I had almost given up on pork chops. It was like I had lost my pork chop 'mojo'. The last few attempts at a quick and easy meal had resulted in dry tasteless chops. I changed a few things this time around. I used thicker chops, and I let them simmer in the sauce for a little more than 45 minutes. They were incredible! So tender I could cut them with a fork. The P-Man blew me kisses in between bites...We ate a chop each the day I made them, and then split the last chop the next day for lunch. I kept the leftover sauce and used it over baked cabbage rolls, and even just over brown rice, with a fried egg for breakfast! What can I say...I was so happy I could have let out an 'oink' of joy! (Sorry pig lovers...)

This recipe is adapted from a recipe of the same name found in a cookbook called:
"James Barber's Immodest but Honest Good Eating Cookbook."
written by James Barber.
I modified it, of course...

Trim the pork and make a paste with the salt, pepper, mustard(s),Oregano, and butter. Spread the paste on the chops, both sides, and let them sit on the counter while you finely chop an onion. Fry the onion in about a Tbsp of olive oil until it looks translucent. Add the pork chops and fry to a golden brown, both sides and add the wine. (I had trouble browning the meat because the onions were all over the bottom of the pan, but I did cook them a bit on both sides, then added the wine to de glaze). Simmer, lid on for 45 minutes. (After the wine, I added the corn, the tomatoes, and  bay leaf, and continued to simmer. I had no lid, but covered the pan with aluminum foil, and as I said...my faith in pork chops has been restored. I sprinkled the parsley on top of the chops and served them with brown rice and baked acorn squash.)
Pretentious? More like Perfect!
Enjoy!
Posted by Cathy B at 3:29 PM