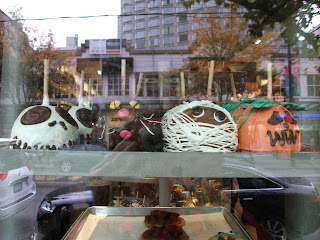 I was in the big city last weekend, and walked by this VERRRRY SCARRRY display of SPOOKY candy/caramel apples. Halloween is this weekend, so I felt a proper FRIGHT would be in order! I absolutely love the MUMMY apple...crazy and creative...courtesy of The Rocky Mountain Chocolate Factory on Robson Street.

I am constantly amazed at how important,and hip,the topic of FOOD has become. I was recently at an Interior design show in Vancouver, and The Museum of Vancouver had a booth. To tell you the truth, I didn't even know there WAS a Museum of Vancouver. It was nice of the lady at the booth not to call me an idiot, but to simply point out that they have gone through a Re-Branding. The other really interesting thing about them is that the exhibition that is on now, until January 2nd 2011, is called: " Home Grown: Local Sustainable Food ". I hope you will click on the link below and visit their website, but I will give you a little 'teaser'

" Home Grown is a photographic exploration of local food production and sustainable farming in Vancouver and the surrounding region, presented by MOV and FarmFolk/CityFolk, www.rarmfolkcityfolk.ca

What is also very interesting, is that TIDEScanada is sponsoring a speaker's series about food called Food and Beers. I am going to the December the 8th one, called Vancouver's New Food Writing.

It's great to be part of such an exciting and dynamic group as the FABULOUS FOODIE movement. Long may we eat, and drink, and grow food, and write about food and, and, and...

www.museumofvancouver.ca
www.rockychoc.com
Posted by Cathy B at 2:37 PM No comments: 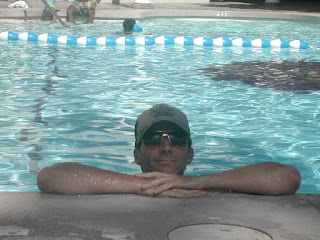 This is the person who I constantly make spaghetti for. This person would rather be eating spaghetti than swimming in this pool. This...is the P-Man. I had an evening engagement last evening, so I thought the P-Man would find it comforting to come home to an apartment that eventhough was empty...contained the smells of his favorite meal. I took a bit of time in the morning to pick up some fresh ground turkey thigh, and when I got home, I tried to create a tasty yet DIFFERENT sauce for the beloved spaghetti. I started by sauteeing the standard onion,garlic, celery and carrot, I added the meat, and a huge handfull of dried basil, as well as a bit of ground chili pepper,salt and pepper. I then added a prepared jar of you know what sauce, some Italian stewed tomatoes, AND a can of drained and rinsed chick peas. I added a bit more basil, pepper etc, and set the pan on very low. I had time to simmer it for a few hours, so I changed out of my now very oniony smelling cooking clothes, grabbed my sunglasses and a magazine, and headed down to Le Vol Au Vent for lunch. After a few too many glasses of wine...AND one of the most tender, flavourful, luxurious, sumptuous,( well, you get the picture!)braised lamb shanks I have ever had the privelige to suck the meat off of...I decided I better stagger up the hill to see if my apartment was full of smoke! My sauce was fine...so I threw it in the fridge to cool, sent an e-mail to the P-Man, regarding the menu for the evening, and headed out to my event...A WINE TASTING!! HA! Way to get a head start...I told myself...The P-Man was sleeping when I returned home a few hours later...but if he has any say in it...tonight the leftover meal of choice will be??? SPAGHETTI...OF COURSE!!
Posted by Cathy B at 3:33 PM No comments:

Labels: The PMan in Hawaii...wishing he was eating spaghetti 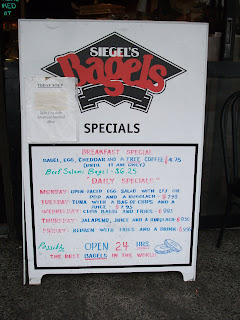 I have written before of my love for Siegel's Bagels. The P-Man and I headed into the big city last weekend, and I had to stop. You see...my reward card was FULL. I was entitled to 1 DOZEN FREE BAGELS!!! To celebrate, I thought I would branch out and order a new flavour. If you've never been to Siegel's, really, What's wrong with you? Their bagel selection is something special. Always your old favorites like onion, and poppy seed. Occasionally, new flavours that are worth a try. After scanning the bagels behind glass, like a hungry kid at the movie concession, I decided to try 4 Rosemary and rock salt, in addition to my 4 multi grain, and 4 poppy seed.

After a nice day in the big city, we headed home to a bagel dinner. I lightly toasted a Rosemary and rock salt bagel. I spread it with some of Siegel's delicious lite veggie cream cheese, and added a couple of slices of ripe, red tomatoes, picked up from the Vernon farmers market, and a couple of chunks of baked salmon, from the night before's supper. By the time I walked out of the kitchen with my open faced plate of goodness...the P-Man was swiping up the extra salt and rosemary from his now completely empty plate, and heading into the kitchen to put another bagel in the toaster!

The Rosemary flavour was so intense when it was warmed in the toaster. The rock salt just added extra ZIP...especially because I used tomatoes, and thankfully DID NOT salt them. As I settled in to watch a little tv before bed, I was contemplating the morning joy of scrambled eggs, with a buttered poppy seed bagel... 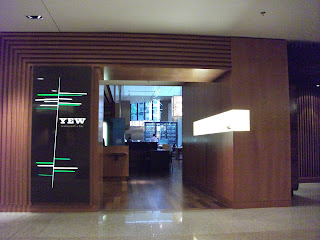 I had better luck. I ordered the fried chicken, and it was hot and crispy, and well seasoned and moist and juicy...do you get the picture? It was like some little old Southern grandma had flown into Vancouver to fry some chicken...just for ME! I can't even really recall the sides...oh yes, it was a snappy little salad with arugula and watermelon and cheese, I think. The chicken stole the show...I just ate the salad to be polite!
Posted by Cathy B at 4:43 PM No comments:

Sorry little Piggy...I'm a little OFF my food! 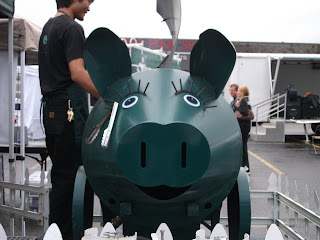 I spoke to my dear cousin P.in Winnipeg yesterday. We had a chat about this and that, and somehow it came up that SHE DOESN'T LIKE TO READ ABOUT PEOPLE TALKING ABOUT FOOD!! Considering I write a food blog...I found this little insight quite disturbing. Once I recovered from the shock, I began to consider what she said. You know what? I kind of agree! I think that food...and talking about food has become some sort of neurotic obsession. Especially with North Americans. I read an article recently in British Elle, that said that people treat food in such an absurd way, that they have forgotten the basic feelings of fullness, and hunger, and the simple DESIRE to eat something. With all of the bizarre food fallacies floating around...not to mention the ridiculous diets and foods that are GOOD FOR YOU...OR BAD FOR YOU...no wonder people are scared to eat!

I have had a bit of a cold this last week or so, and I haven't really felt like eating. I have, on the other hand, been CRAVING certain things. Certain tastes, like sour cream, and nectarines, and chocolate, and beef. I have done my best to eat whatever I have been craving, and I am starting to feel better. I had a large feed of Sushi yesterday. I was sooo hungry walking down the hill...unable to find a ripe nectarine, and worried that Taka Sushi was closed, as it was only 3:15. I found it was open...and when I got home, I sat down, and ate every bite. I also drank a whole pot of chai tea, with hot milk...and felt revived.

I feel better today...no coughing at all. My stomach is starting to rumble. What's for lunch?
Posted by Cathy B at 12:04 PM No comments:

BBQ on the Bypass...Getting PORKY with it! 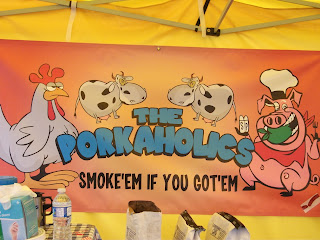 Having lost more than 40 pounds on Weight Watchers, a couple of years ago, BBQ on the Bypass could have been a trouble filled food event for me! On the contrary...I volunteered at the event, and ended up being so busy with a variety of duties...I barely had any time to eat! I did manage to eat a most delicious bbq'd beef brisket sandwich on a soft roll, with crunchy coleslaw on the side...but that was IT!!! The event was sponsored by Well Seasoned, a gourmet food store on the Langley Bypass. I have been doing some work for WS, and have heard about this event, and wanted to experience it for myself. It was a great day, despite the weather in the morning. Judging by the delicious smell of smoking meat, and the crowds of happy people walking around with bbq sauce dripping down their chins, I would say, a good time was had by all!
Posted by Cathy B at 5:38 PM No comments:

Labels: one of the many original booths at BBQ on the bypass 2010

The September Issue and a little DOLCE GELATO 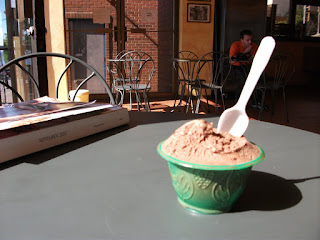 We have had a bit of a reprieve from winter. September has been warm and sunny! I have been down at the beach for lunch a bit too much, lately...as Jack at Slainte put it: " So Cathy, How are you enjoying your RETIREMENT!" Yikes! The truth HURTS! HA!
I have been taking my Social Media class on Monday nights. I don't know why, but that one act has sort have been my tipping point. I feel as if I am running around like a crazy chicken with no head...or...spending 3 to 4 hours a day chained to my computer investigating this strange new world of Social Media. Either way...my blogging has suffered...and I do apologize.
My new goal is shorter blogs, and more photos, and lots of links to everything and anything related to my new social media life.

I am becoming positively ADDICTED to the Halibut Bites at Slainte by the Pier. For a little under 9 dollars, you get a lovely deep bowl full of the most perfect little deep fried...but not at all greasy...hot sweet tasting morsels of snow white halibut. Each bite then has a dip in the most creamy and delicious, tangiest, tartar sauce, and the whole experience is topped off with a spoonful of sweet,green,mushy peas! With a glass or two of a crisp Sauvingnon Blanc...you have a perfect lunch. ( I do on occasion add some shoestring or yam fries, or salad...but the fish is what I LOVE!!)

How convenient that only 3 doors down from Slainte...is Dolce Gelato. I am always looking at the new flavours...but I have lived in White Rock for almost 10 years now...and the CHOCOLATE is what turns me on. A scoop in a cute little cup, with that little plastic spoon makes me feel like I hardly ate anything! The smooth rich chocolate flavour that keeps me purring like a kitten all day...lets me remember why I never grow tired of the best Gelato I have ever eaten...
Posted by Cathy B at 12:20 PM No comments: