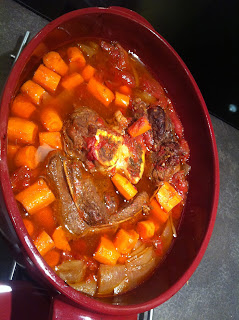 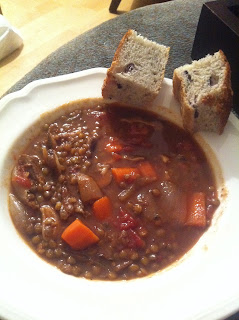 I cook every day. I never used to cook every day. When I was working full time operating 2 ladies clothing stores in different cities I ate out a lot, and I got really, really, fat! Now I work less than full time with clients who let me determine my work schedule...and I am not so fat, anymore!
Pot Roast
I haven't cooked a pot roast in ages. Frankly, the last time I did it was a bit stringy and dry...put me right off. This time I purchased a pot roast from a butcher and it turned out so tender, so delicious,the P-Man and I just kept eating, and looking at each other...Like Julia Child and her husband when they are eating in that restaurant in Paris, when they first moved there!
Back to the pot roast. The other thing that I DID NOT do was brown the pot roast before I put it in the oven to braise. Every recipe I looked at said I should...but browning a big roast on my stove would have had my apartment smelling like dead cow for days!
So...all I did was rub the roast all over with kosher salt and pepper. Chop 2 big onions into large chunks, and peel and chunk up 1 pound of carrots. I added about a cup of canned tomatoes, 2 cups of low sodium vegetable broth, a couple a bay leaves, 2 Tbsp of Worchestershire sauce, and a squirt of ketchup. I put the lid on, and cooked it in a 300 degree oven for 4 hours.
IT WAS FANTASTIC!
Beef Lentil Soup
After we had devoured the pot roast I still had some sauce left. No way I was throwing it out, so I cut all the meat off the bone I could, and added the leftover sauce, the meat, the rest of the can of tomatoes(see above) approx. 2 cups of vegetable stock, a cup or so of water, 1 cup of du puy lentils, and a couple of Shitake mushrooms, sliced. I brought everything to the boil, then turned down the heat and simmered it until the lentils were tender...about an hour. It was so rich and 'beefy', the P-Man, who normally would think that soup for dinner was some sort of punishment, ate 2 bowlfuls(that's not a word, is it?)!
IT WAS INCREDIBLE!

Do IT!
Run to the butcher and pick up a pot roast...Let me know how it turns out!
Posted by Cathy B at 5:54 PM