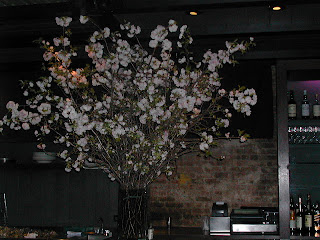 These flowers were on the bar at The Mercer Kitchen when the P-Man and I were in NYC. I have been back for nearly 2 weeks now, and have found it really hard to get back into the swing of cooking! Kind of ironic, really. You start a blog about food, and then you don't feel like cooking! HA! Today...something changed, and I started to cook...Hell...I even BAKED!! I woke up and made myself my favorite breakfast. A bowl of Nature's Path organic instant hot oatmeal ( maple nut flavour) with dried mangoes mixed in, with 1% Avalon milk, and cup of Maxwell House instant coffee. YUM! I started making a couple of salads that the P-Man and I could have for supper with some turkey Salisbury steaks from The Turkey House, and a sweet potato mashed with some sour cream and green onions.

First I cut up some fresh green beans and fresh cauliflower, and boiled them for about 4 minutes in salted water. I then made a vinaigrette with olive oil, raspberry vinegar,whole grain mustard, dried tarragon and some salt, pepper, and sugar. After draining and cooling the vegetables, I pour on the vinaigrette, mix it up, then leave it on the counter to marinate.
Next salad consisted of thin slices of fennel and celery, combined with the tender inner celery leaves, and some leaves of Italian parsley. I refrigerated it until the P-Man arrives home from work with a couple of lemons. I will mix up another vinaigrette, consisting of lemon juice, olive oil and salt and pepper, and toss it together just before we eat, and garnish with thick curls of Parmesan cheese.

For lunch, all I wanted was spaghetti with garlic and olive oil and cheese, with a little black and red pepper mixed in. If I was going to purge my body of yesterday's lunch...three whole raw cloves of garlic would surely do the trick! I boiled some spaghetti with a bit more salt than I would usually use. I roughly chopped 3 cloves of garlic, and a handful of flat leaf Italian parsley, and grated some fresh Parmesan. When the pasta was al dente, I drained it, and left it in the strainer. I put the hot pot back onto the burner, turned to low, and pored in some olive oil, and added the garlic. You don't want to brown the garlic, just cook out the raw taste. Next, turn off the heat, and add some red pepper flakes. Finally, throw the spaghetti back into the pot and toss everything together with the chopped parsley and lots of black pepper. Pour everything onto a plate and cover with grated cheese. EAT WHILE IT'S HOT!!! YUM...I HAVE BEEN HEALED!!!

After lunch I decided to make some banana blueberry bran muffins. I found a recipe in my old Harrowsmith Cook Book, and was of course missing some ingredients, and substituted a few others, but they turned out pretty good. I will let the P-Man be the judge, and if he pronounces them delicious, I will include the recipe in my next posting.
Posted by Cathy B at 3:15 PM