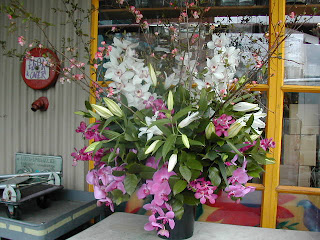 As I was shopping for produce at Granville Island, some incredibly talented woman was creating this stunning floral arrangement. Believe me...It was even more beautiful in real life.
I had to go to West 4th Avenue. I have for years, eaten at Sophie's Cosmic Cafe, when the lineup is not snaking all the way around the corner. I had heard about a relatively new restaurant down the street from Sophie's. It used to be called Fuel, but was now re-named Refuel. Every time I eat at Sophie's, I need a nap afterwards. The food is so good and comforting, and the portions are HUGE. I decided to try Refuel. It was a Tuesday afternoon around 12:30, and the restaurant was a little less than half full. I had the option of sitting in the back corner, or near the bar/open kitchen. Since I had not brought a magazine to read, I thought watching the chef in the kitchen would be interesting. The decor is quite spare. The tables are a lovely plain honey colored wood, with no other decoration except a small white square plate. The only other thing on the table is the cutlery wrapped in a simple white linen napkin. The rest of the place was not my taste. The walls were panelled with a pale wood with alternating cutouts of a shape I can only describe as looking like a big thermometer. Showing through the cutouts is the most unappetizing spring green. The back wall is a curiosity. It has 3 things hanging there. Sort of back lit color photos of stylized flowers, or spores. At least the simple leather chairs were comfortable.

I ordered a glass of Pinot Grigio...very well priced at $6.95, and had a look at the menu. I didn't want a big lunch. It was quite difficult to decide, as items had no description. I decided to have a couple of appetizers. I ordered North Carolina Pork Ribs, Champ Gratin, and Crunchy Coleslaw. My server brought everything together, as I asked, and I started to pile a little bit of everything onto that little white square plate. I tried the ribs first. They were deep fried. I was surprised. When I hear ribs...I immediately think BBQ sauce. I guess I should have asked. They were not greasy, but there was certainly not a lot of meat on them, and besides salt, no other seasonings. Next I had a mouthful of coleslaw. It was the kind of coleslaw that is sort of cooked. You heat up the oil and vinegar, and pour it on the cabbage. It too, lacked any kind of flavour, except for salt. I also had pictured more of a creamy fresh coleslaw. It was supposed to be crunchy. All of a sudden, the success of this lunch depended on the potatoes. I dug into the little bowl, and scooped up a nice creamy spoonful or two, and was really surprised with the texture. They were silky and soft, and so luxuriously smooth that I let out a little sigh of happiness! They had been mixed with a finely chopped scallion, and had a light sprinkle of breadcrumbs on top, then briefly browned under a broiler. They certainly had the most flavour. Unfortunately, they were sooo smooth and creamy, it was almost like eating air. Going back to the other two items was almost irritating, as I just wanted some flavour...and there was NOTHING. I watched the chef while I ate. He moved quite slowly, even though he seemed to have a lot of pans cooking on his enormous gas stove. I kept watching him bend over and take a variety of items out of many plastic bags and add them to many pots and pans. The weird thing was...I couldn't smell anything. No garlic, or onion...nothing. It was like my lunch. I knew I was eating, but the taste didn't match what it looked like. The bill came to $27.00 without tip, and for the whole rest of the day, my stomach didn't make even one little happy noise. It was like I had NEVER HAD LUNCH!