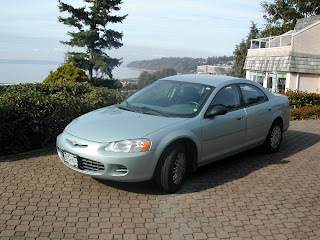 This is my cute liltle car. I call her Smoochie! My bad food day, yesterday, all started with her. If you read this blog, you know that I lost fourty pounds a couple of years ago by going to Weight Watchers, and making some big changes in my life. One of these big changes, was taking the insurance off my car, and walking, or taking public transit. I have not missed driving. The P-Man travels quite a bit with his job, so when he is away, I drive his car. It was time to make a decision. I have put Smoochie up for sale! Yesterday morning, I purchased a day's worth of insurance, and headed out to Abbotsford. A friend's dad lives in a house with a very visible driveway, and agreed to let me park her there and will try to sell her for me. The friend's dad then had to drive me back to White Rock, and so I asked if I could buy him lunch. HE WANTED TO GO TO MCDONALDS!!! Yes, THAT MCDONALDS. Now even when I WAS FAT...I NEVER set foot in McDonalds. I have not been to a MCDONALDS since I was 15. At 1 pm yesterday, all that changed, and I walked into the McDonalds on 152nd St in South Surrey, and proceeded to eat: A Crispy chicken, ( HA!) burger thingy on a ciabatta bun ( HA!) with lettuce and tomato ( HA!) and a large french fries and a JUMBO diet coke. I didn't really think I could do it. I didn't think I could eat that food. Somehow, the old programming came back. I opened my hinged container, no longer Styrofoam, now recycled cardboard . I took my fries, and dumped them into the empty part of the container. They have done away with ketchup packages, so I dutifully dunked my fries into the little paper container filled with ketchup that I had pumped out, when I went to look for a napkin. I took a bite of my crispy chicken (HA!) and the taste was so strange. It wasn't crispy, and there was a mayonnaise type sauce on the one side of the bun, and I could SEE the tomato and lettuce...but in my mouth...there was almost no taste. The texture was almost non-existent. So soft it almost melted in your mouth. The only thing that felt different was the warm lettuce. It became sort of stringy, and I had trouble biting through it. The fries were almost as I remembered...but I honestly could not taste potato. They smelled like potato...but all I tasted was ketchup. We sat and talked, and we ate it all. We stayed until we had drank all of our diet Coke...right until we made that little slurping noise with the straw. Then he drove me home, and headed back to Abbotsford.
I had a bit of computer work to do, so I had a glass of water, and worked until I had to walk to Weight Watchers. I only have to attend one meeting a month to be weighed and it was the last day of the month, so I had to go. All afternoon, I had such a strange taste in my mouth. I wasn't hungry at all...but felt kind of out of breath and slightly light headed. I got ready, and started to walk. By the time I had walked 10 steps up the first hill, I was puffing like I was marching up Everest! My legs felt like they weighed a hundred pounds each, and I was walking so slow, I thought I actually might have to stop! I kept going, and stopped at a bakery, to pick up some whole wheat hot dog buns for supper. I had bought some great European turkey weiners at The Turkey Store the day before. I was still feeling so strange, I thought I would get a muffin, and a coffee to have after the WW meeting. I bought a raspberry muffin, and kept going. I got to the meeting, and did my weighing...( up 2.6 lbs for the month! Curse You McDonalds!) sat down and ate my muffin and drank my coffee. As I ate my muffin, I was thinking that I was also starting to go blind. This muffin didn't have any raspberries in it. It was shot through with a strange sort of day-glo pink colored I don't know what. There were no raspberry seeds. Raspberries are not that color. At the very bottom of the muffin was a faint trace of what smelled like raspberry jam. Good grief...I had spent the whole day eating FAUX FOOD!! I decided to use the bathroom before I started walking home, and I could not believe what I saw in the mirror. MY FACE WAS ALMOST PURPLE AND SORT OF BLOTCHY. I mean, I walk almost every day...and I am very rarely winded, or light headed, or red faced and blotchy!! Had I been POISONED?? Is McDonald's AND walking a recipe for disaster? I need to go home and lie down.
Posted by Cathy B at 2:18 PM