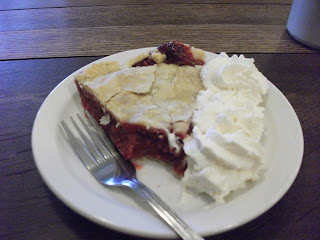 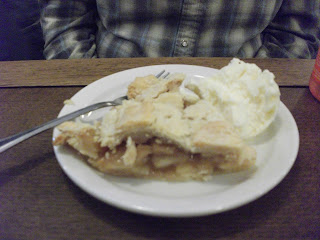 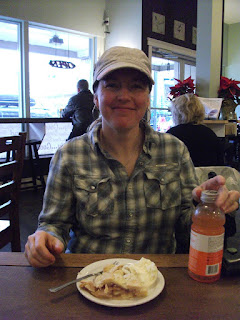 If you are familiar with this blog at all, you know of my love of pie. I was in beautiful Salmon Arm last week, visiting a sick brother in the hospital, another brother and his wife in Canoe, and my niece and her family in Kelowna. The trip was exhausting, and stressful, and if it hadn't been for this pie...I probably would have thrown myself into the nearest lake in a final dramatic gesture!

Downtown Salmon Arm has not changed very much since I'd been there 10 years ago. My niece and I took a walk around and discovered a new business and a welcome addition to the downtown: Shuswap Pie Company. This place had it all. It was a real bakery, a decent sized sit down restaurant, and I wished it was in MY TOWN!! We hadn't had lunch, but were in the market for a nice soothing snack. As soon as we saw the sign it was an easy decision. We decided to have pie. My niece and I both had bakers for fathers, so we have eaten our share of pies. I decided on the rhubarb/raspberry, and she had the apple. My pie had the nicest, flakiest, thin tasty crust that wasn't the least bit soggy. My filling was the perfect consistency. It was neither jammy...nor so runny, you walked out of the place WEARING half of your pie. I could taste the rhubarb, but the raspberries added such a nice summer sweetness, I couldn't believe I was eating this pie in January. I love raspberries, and it's always this time of year I start to miss them, knowing that July is a REALLY long time away. Her pie was one of those thick rustic crust pies, with the ability to stand up to the juiciest apples. It also had NO RAISINS. We BOTH HATE RAISINS!!! She said that her pie had a very flavourful crust, and perfectly cooked apples, without other flavours like cinnamon overshadowing the tart-sweet apple.

The restaurant was busy, for a Thursday afternoon, and by the look of the specials board, they had already sold out of one of the daily soups, and a savoury pie feature. We finished our pie, and headed out. She was dropping me in Canoe, before heading back home to Kelowna. It was just like when I was a kid, riding in a car with a stomach full of pie. The circumstances around this trip were not especially happy. When we look back, I hope we just remember the pie.