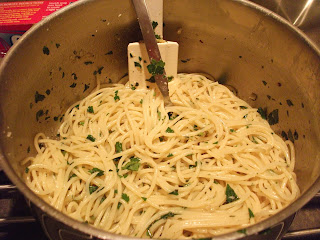 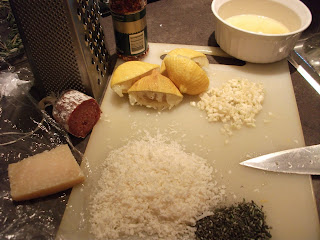 When I worked at Delitalia, I worked with a lovely girl named Jenny. I liked to call her Jenny-Pooh. She was experimenting with an alternative to our house made tomato sauce, and came up with a sauce that was composed of lemon juice, olive oil, grated Parmesan cheese, salt and pepper. We tasted it one afternoon, and pronounced it a WINNER!!

As you all know...The P-Man has a thing for spaghetti. His favorite sauce is a ragu, or tomato based sauce. During the holidays, he was starting to go through 'spaghetti-withdrawal' and I had to act fast! I only had a couple of lemons, and some Parmesan, and some fresh Rosemary...so I thought I would try Jenny-Pooh's creation. Here's how it went:

I zested 2 lemons, and chopped the zest up quite roughly. I squeezed the juice into a small bowl and added some olive oil, and a BIG handful of freshly grated Parmesan cheese. I chopped at least 4 or 5 tablespoons of fresh Rosemary quite finely, as well as a good handful of flat leaf Italian parsley, and four fat cloves of garlic.
I heavily salted the pasta water, and added a box of spaghetti. It has been my experience that oil based sauces need to have the actual pasta salty...as you can't seem to add enough salt to the oil to make it taste right. When the pasta was al dente, I drained it, reserving 1/2 cup pasta water. I put the pot back on the heat, and added some olive oil,the garlic,a shake of hot pepper flakes, and the chopped Rosemary. When I could smell the garlic, I took the pot off the heat and added all the rest of the ingredients and gave the pasta a nice toss. I added some freshly ground black pepper, and some more cheese, and we ate it while it was super hot!! It was DELICIOUS!! The taste was so fresh from the lemon, and the zest. The Rosemary was incredibly fragrant, while at the same time adding a real earthy, herbal note. The cheese and the garlic played right along, with each ingredient nicely balancing the other. Even though we were eating this pasta on a cold December day...I could just imagine eating it out on the patio on a hot summer night, with a cold glass of Pinot Grigio.

The P-Man was pleased... Many Thanks to Jenny-Pooh!
Posted by Cathy B at 2:27 PM