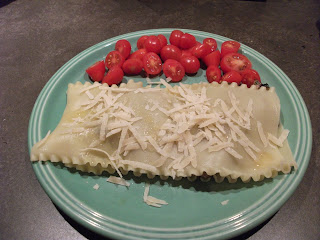 I have been craving mushrooms. I recalled seeing Laura Calder make a sort of 'deconstructed' ravioli with mushrooms and decided to try it. The recipe was incredibly simple. Just an assortment of mushrooms sauteed with some garlic in a bit of olive oil, adding stock to create a sauce. I started cooking everything too early, anticipating the P-Man's arrival from work. He was about a half an hour late. I think the dish suffered from being not quite as hot as it should have been. By the time he got home,the sauce had thickened considerably and should have been reheated with more stock to make it a mushroom sauce, rather than a filling. The ravioli could have been further moistened with browned butter poured over the top, as the original recipe suggested. I just couldn't bring my 'Weight Watchers Self' to do it! Despite all of the above, We were pleasantly surprised by the flavours and texture of the dish. I loved the earthy sweetness of the mushrooms, combined with the silky pasta. Laura's photo is far prettier than mine, so don't let my photo put you off! I would definitely make this again.
I found Laura Calder's recipe on a super cute blog called:

Living in the kitchen with puppies.

Have a look, her substitutions sound tasty. I stuck with the original recipe, my only substitutions being parsley instead of dill, a few Shitake mushrooms thrown in for extra flavour, and a handful of fresh Thyme.

For a meatless meal, I found it comfortably filling. It succeeds in showcasing the flavour and texture of mushrooms in the best possible way.
Posted by Cathy B at 6:49 AM

Labels: Mushroom ravioli-Laura Calder and Living in the kitchen with Puppies