I have NOTHING to COOK IN!!! 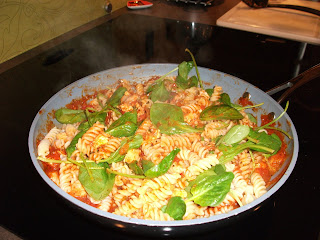 I tend to take pots and pans for granted. They are not very glamorous or very pretty. They just sit in the bottom,dark cupboard until you get hungry.

GREEN OATMEAL
I have been cooking a lot of steel cut oats for breakfast, lately. A few days ago, I got out a pot, boiled some water, added the salt and oats, brought it to a boil and couldn't believe my eyes! My oats were turning a sort of 'minty' green...and it wasn't even St Patrick's Day! It was kind of early in the morning, so after a bit more stirring, the colour faded, and I thought I must have imagined the whole thing. A couple of days later...It happened again. I realized that the pot I had been cooking my oatmeal in was OLD...I mean really OLD! This pot had a copper bottom, and if I had to guess, I would say, It belonged to my mother, and I had probably taken it with me when I moved out, nearly 30 years ago! My mom and dad were married in 1948. I started to imagine what had been cooked in that pot in the last 60 years...and wondered if I was in for an excruciating death from 'old pot/copper-bottom poisoning!'
MY GREEN PAN
My favorite pan today is a 'green pan' a huge, heavy 18 inch high sided skillet that I bought out of frustration with flaky flimsy teflon coated pans that I was constantly replacing in fear of an excruciating death from 'teflon flake poisoning'! I make nearly all my meals in it...but even if I take really good care of it...I don't think it will be around for 60 years. I didn't have the heart to throw out my copper bottom pot...made by REVERE WARE in Rome NY USA, so I wrapped it up and put it into a bag for the Salvation Army. Maybe someone will cook something in it again. Green Potatoes, anyone?
Posted by Cathy B at 7:48 AM