Toast 2 Ways: MFK Fisher and Me 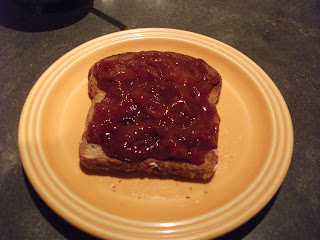 I realize that writing an entire blog post on toast could be considered ridiculous,but I intend to soldier on...

I spent the other day with a friend who is three weeks away from motherhood and even in her delicate condition,she managed to make us lunch.Watching her cook reminded me that soon she would be responsible for the nutritional needs of a tiny baby,then a toddler,and so on.Somehow, sitting there in her dining room,chatting and watching her while she walked from counter to stove to sink to refrigerator,reminder me of sitting in the kitchen that I grew up in.I would wait patiently...who am I kidding, impatiently,for someone, my mother,father,or either brother to feed me. My brother David was always cooking,and always eating. Because he was usually hung-over and I just never stopped talking, to shut me up, he would make me toast. Sometimes it was covered with cinnamon and sugar, but my favorite was a piece of rye bread with onion or garlic rubbed onto it. The toast was always nice and hot,almost too toasted,and slathered in butter.Then he would chop the onion or garlic in half, and rub it into the toast until the toast was almost flat! I still remember lifting that ugly piece of bread to my lips, and before I could even bite it...the smell of the pungent onion or garlic would go right up my nose.There was always too much butter so it would dribble down my arm and I would have to lick it off, and by the time we had both eaten the first piece,he was handing me another one.

MFK Fisher speaks with candour about what she feels to be unreasonable dietary rules in post war America Especially around the new idea of balanced meals for children.

"And later, when they(children) begin to think of the automatic extravagance of most of our menus,and above all of the ghastly,stupid monotony of them,they too will cast off many of their habits,and begin like you to eat the way they 'want' to instead of the ways their parents and grandparents taught them. They will be richer,and healthier,and perhaps best of all, their palates will awaken to new pleasures,or remember old ones.All those things are devoutly to be wished for,now especially." MFK Fisher

I am a lifetime member of Weight Watchers. Over the last few years, I have made a choice to eat less bread and butter. The photo above has been one of my current food favorites.I have been stewing fruit with a little brown sugar,in this case plums and eating it on toast.Lately I prefer to taste butter when I take a bite of the hot toast smothered with the warm fruit.It makes me happy and satisfied.

MFK Fisher writes a chapter called: "How to be a Wise Man" One of my favorite passages I find hopeful and heart breaking describing sharing food with a child.

"It was a nice piece of toast, with butter on it. You sat in the sun under the pantry window,and the little boy gave you a bite,and for both of you the smell of nasturtiums warming in the April air would be mixed forever with the savor between your teeth of melted butter and toasted bread, and the knowledge that although there might not be anymore, you had shared that piece with full consciousness on both sides, instead of a shy awkward pretense of not being hungry." MFK Fisher

Memories of Relationships Past

Eating toast with my brother is something that I did for only for a few years.Our relationship changed.He got married and moved out,and my mom dad and I moved to another city. We were as close then as we would ever be for the rest of our lives. It was because for that 10 minutes,in the kitchen our house,we had something in common,something we both agreed was delicious.We didn't have to relate to each other or even talk, we just ate our toast.

Labels: a piece of toast with butter and stewed plums