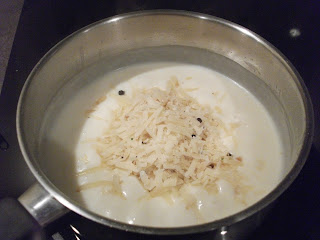 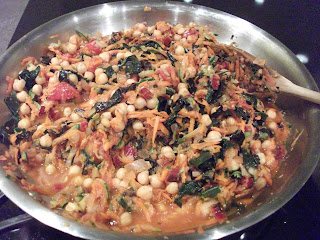 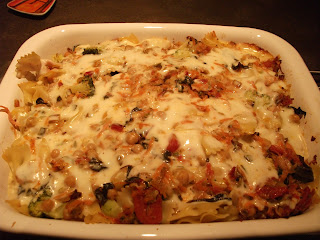 This pasta dish is really as large as it looks! It's a monster! A crowd pleaser! One of those things you bring to a pot luck, and people keep asking you for the recipe! I made this baked pasta while the P-Man was on a business trip to China, and a friend and her cute baby were coming over for lunch. We ate. The baby had her 'liquid lunch' and I gave my friend a container full to take home. The P-Man was due to arrive home 2 days later jet lagged and hungry...and when I pulled this out of the fridge, I couldn't tell what made him happier...seeing me, or seeing a big dish full of pasta! You will need about an hour to assemble the ingredients for this dish, including making a while sauce. Not a ton of time, considering how much of a bang you get for your buck! Feel free to substitute veggies of your choice. As usual, my choices were determined by my weekly fresh produce box, courtesy of SPUD.

In a big skillet: olive oil to coat bottom. Add onion,garlic,chard stems,zucchini,carrot, oregano, salt and pepper, and saute until soft. Add garbanzos,tomatoes and chard leaves and stir until leaves are wilted. Check seasoning and set aside to cool. Be sure that the mixture is well seasoned.

Make white sauce, and when it has thickened add the cheese and stir until melted. Remove from heat. Taste and re-season. I didn't need to add much salt, and no pepper, due to the fact I used a well aged,full flavoured cheese. Always taste before adding salt, as cheese is quite salty. Stir the sauce every once in awhile to keep it smooth.

Put a big pot of water onto boil, and season with at least a handful of kosher salt. Boil pasta according to directions on the box minus 3 minutes. During the last minute of cooking, throw the broccoli into the pot, and after a minute drain, and set aside.

My dish measured 12X9, and was 3 inches deep. Pre-heat the oven to 300 degrees.( I cooked the pasta for 1 hour, but could have gotten away with 45 minutes oven time.) Splash some olive oil into your dish, and coat the bottom and sides. layer equal parts veggie mixture/pasta-broccoli/white sauce. Cover the dish with tin foil and bake for 1 hour. This pasta is great re-heated the next day. It's a luxurious, and hearty dish, full of flavour!
If you make any substitutions, or get rave reviews...leave a comment...let me know!
Posted by Cathy B at 11:43 AM