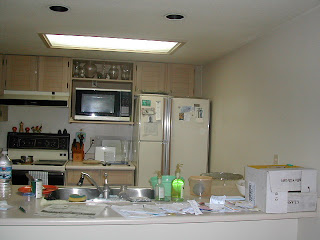 I live in a great apartment. This photo is what my kitchen used to look like. It was a little like a 1980's flashback...without the dusty rose and green flowered wallpaper border! The P-Man and I have lived in this apartment for almost ten years now. I cooked in this kitchen from the day we moved in, until the day we ripped it all out to do the renovation. The kitchen is extremely functional. It is a 'galley' style kitchen, and as you can see the work triangle area is compact, so you don't need to run all over the place while you are preparing meals. We kept the basic layout, but modernized it, with new flooring, counter tops etc. It used to be sort of a' Shake and Bake Chicken' kitchen...but now it is a 'Chicken and Vinegar' kitchen. Same basic ingredients...but a bit more sophisticated.

The P-Man has injured his back. Not good. Back spasms... unsteady walking... big pain. We have been home together for the last 4 days. It has been a bit surreal, him being NOT at work, and him being infirm and in pain. Between chiropractic visits and pharmacy visits we have been watching quite a bit of TV. I saw Laura Calder's cooking show yesterday, and she made a dish called chicken and vinegar. ( www.foodnetwork.ca) Now it has been a very long time since I saw a recipe for something I have NEVER heard of...but this was the case. It looked easy enough. I had all the ingredients, and so today I gave it a try. It was VERY GOOD. I changed a few things. the recipe called for a cut up chicken on the bone, but all I had was boneless, skinless chicken thighs. It called for tomato paste and fresh tomatoes, and all I had was a half can of tomatoes left in the fridge from last week's spaghetti sauce. It also called for white wine vinegar, but all I had was red wine vinegar...so you get the picture. I fed it to the P-Man, alongside some mashed potatoes...and he cleaned his plate, and resumed his stretching. ( In my family...we refer to this syndrome as : " Too Much Togetherness" ) as I don't seem to resemble any of his work colleagues...he is having trouble working out how and if we should be speaking? Later on, I switched the channel back to the food network, ( The P-Man was frantically texting someone on his blackberry and swearing under his breath as he paced the long hall to our bedroom.) and watched an episode of Fresh, with Anna Olson. She was preparing Choucroute Garnie. ( please pardon the spelling) It was essentially sausages and pork chops with sauerkraut. Co-incidentally, I have been CRAVING sauerkraut, and happened to have a package of boneless pork chops in the fridge! Once again, I had most of the ingredients on hand... so I just threw it together, and it is in the oven as I write this. I can serve it with the potatoes from earlier...and it will work well heated up, tomorrow night as well. The apartment is smelling delicious. Hopefully, sauerkraut and pork will help with the P-Man's back. I'm looking forward to supper!
Posted by Cathy B at 3:31 PM