Too cloudy to eat! 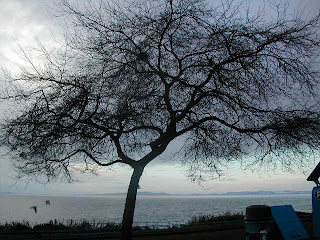 Yesterday was like a summer day. The sun was streaming into my windows, and I had ANOTHER lunch date with an old friend! We were headed down to the beach of course. The scene was strangely unseasonal. People were strolling on the pier with their jackets off. Every restaurant patio was full, and everyone had their sunglasses on, and their chairs turned South. B. and I headed over to Slainte by the Pier. www.slaintebythepier We snagged a seat on the patio, took off our coats, adjusted our sunglasses, and settled in for a long lunch. I only see B. every 4 months or so...so our lunches usually last an hour a month. ( I returned home around 5 pm!) After hearing the daily specials, we ordered the boxty appetizer. If you have never had the pleasure of Boxty...I pity you. It is a soft potato cake, fried to a beautiful golden brown, topped with something different every day. Our cakes featured fragrant, meltingly tender caramelized onions and tangy goat cheese. It was accompanied by a little pile of greens and fresh tomatoes in a tart/sweet balsamic dressing. One word: YUM! B. had never been to Slainte...so looked to me for a recommendation. I suggested the Irish Lamb Stew. B. pronounced the stew one of the best things she had had in her mouth in a LOOOONG time...and said she had to restrain herself from licking the bowl! It did look wonderful. Chunks of tender lamb and potatoes and carrots and turnips in a light aromatic broth. On the side was a piece of freshly baked Irish Soda bread, to soak up any broth the spoon might have missed. Slainte has a sign out front saying that it has the BEST fish and chips on the Beach. Now that is a bold statement indeed. I had to see for myself. I don't usually indulge in fish and chips, as the forty pounds lost could creep back, one chip at a time. I had a choice of fresh red snapper or fresh cod, and I chose the snapper. My plate arrived with a super crispy coated piece of perfectly cooked, flaky fish, on top of a pile of crispy shoestring potatoes. I won't ruin the surprise of the fish. The coating is very unique...you will have to try it for yourself! The plate included some homemade tartar sauce, that was a nice texture, and had a wonderful vinegary bite. B. and I shared a creme brule for dessert, and it came with 2 crispy chocolate biscotti, a few crisp slices of apple, and a dollop of soft fresh whipped cream. This dessert is one of B's favorites...and this one did not disappoint. Our meals matched the day. Fresh, unexpected, and unseasonably warm. Today we are back to clouds and rain. The sort of weather we are accustomed to in our province in February. The Winter Olympics are entering their second week, with a distinctly 'Golden' glow. A little rain will not be able to dampen that spirit! Our lunch deserves a medal for technique and flavour! Go Ireland! Go Canada!