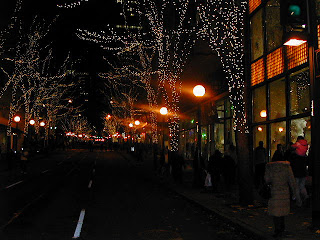 Well...What a day! The P-Man and I just finished watching the Olympic Men's Gold Medal Hockey game...and for those of you living under a rock...WE WON!!! It has been one of those days with nothing much on the schedule except watching the big game, and in a half hour or so...the Olympic closing ceremonies. I decided to do a bit of slooooow cooking today as I started drinking wine around 11:30 AM...and didn't feel like flexing my cooking muscles! I made a simple roasted chicken. It was supposed to be something I saw on Michael Smith's Chef At Home, called chicken coquette ( pardon my bad French) A roast chicken cooked in a closed dutch oven...resulting in a moist tender chicken, without crisp skin, but full of chicken flavour. I had a little organic bird, and stuffed it with half a lemon, the tender inner stalks of celery, and a half an onion. I sat it on a little shelf of celery stalks and onion, seasoned it well with salt and pepper and herbs de provence, and threw it in a 300 degree oven for about 3 hours. I don't have a dutch oven...I only have my mother's speckled blue and white enamel roaster. The hockey game went into overtime...so it was more like 4 hours. It came out a little dry...but very soft and chickeny...but after another glass of wine, I won't even be sad about it! HA! I boiled up a couple of purple top turnips and 4 carrots, and mashed them up with some butter and pepper. I added some leftover brown rice, and I had a great light supper, and will have a nice bit for leftovers and next week's lunches.
Today marks one week until the P-Man and I fly off to NYC to celebrate our wedding Anniversary. This is a big one...so a big trip is required to commemorate the occasion. We made reservations at what look to be some great restaurants...so I will keep you updated on our culinary adventures in the Big Apple.
Posted by Cathy B at 4:59 PM