fooling around with tomatoes and red peppers 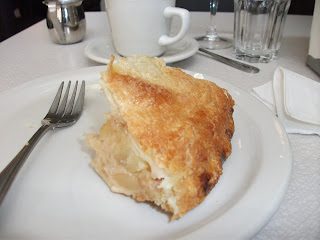 If you read my last blog, and haven't managed to make your way to the Acme Cafe for some fabulous pie...Please see the photo to the right! MMMMM....PIE!!! I feel a little like Homer Simpson!

A week or so ago, I brought home a large bag of red and orange bell peppers, and a medium sized tub of tomatoes from the farmers market. As usual, I had no idea what I was going to make, so every day or so, I had another look at them, and waited for inspiration to strike. I decided to make a salad for lunch, so I cut up one of the tomatoes. To my great surprise, despite a lovely red color,they were not at all sweet. I had seen someone on tv, roast tomatoes in the oven to develop their sweetness and intensify their flavour. I thought it was worth a try. After I cut them up, and tossed them in some oil and herbs and garlic, they barely filled the baking tray. Then I thought about the peppers. I prepared them the same as the tomatoes, placed them in an oven that was a mere 200 degrees, and left them to roast for 7 hours. When I took them out, they were shiny and shriveled up, and looked like little vegetable candies! I threw them all into a blender with a bit of white wine and water, and pureed them. It was amazing how thick the mixture was. I kept adding liquid until I was happy with the texture, and proceeded to poach some shrimp, cook some linguine, grate some fresh Parmesan, and added the pureed tomatoes and peppers. The flavour was incredibly intense, and needed a bit more thinning out, but overall, I really enjoyed the contrast to regular tomato sauce. I kept the rest in the fridge and have added it here and there to other dishes, when I thought they could use a bit of vegetable ZIP! I will use this method again...especially with tomato and pepper season drawing to a close
Posted by Cathy B at 3:27 PM