Lunch at the Acme Cafe 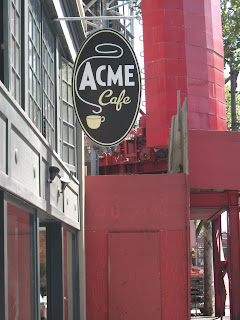 I had to renew my passport. It doesn't expire until December...but I am always early for everything! I decided to head into Vancouver, and thought that if I have to sit for many hours on a hard chair in a scary government office...I had better have a good lunch beforehand. I had read a review of the Acme Cafe somewhere, and as I recall, the reviewer spoke a great deal about the decor, and location. The location being 51 West Hastings, I was curious, and a little apprehensive.
The location is very close to the new Woodwards development, right next to a vacant lot, awaiting some fabulous new building. The sign out front is adorable, and given my age, I associate anything 'ACME' with the Roadrunner and his arch nemesis Wile E Coyote. The interior could not be farther away from a 1970's cartoon. It was clean and cool, and sleek and white. The horseshoe shaped counter, with the classic spinning stools, along with a strange looking machine that has been converted into a place to display delicious PIES, was the only nostalgic reference.

At 12:30 on a sunny Thursday afternoon, the place was packed. I was told a table would be ready in a minute, and given a menu to look over. I took a quick look, but my attention was taken by a great looking display of baked goods to my right, that consisted of cookies, cupcakes, muffins, and a beautiful multi layered cake with blindingly white icing. I also noticed that I was now standing in the Take-Out line. A very good idea in the morning I can imagine, with people pouring out of the neighbouring condos. Some actually coming in for a sit-down breakfast...others grabbing something to-go. My table was ready, so I had a seat.

I decided on the Meat Loaf Sandwich. It came with either: a cup of soup, or broccoli almond slaw and potato chips. I chose the soup. It was described as potato/ vegetable/ Parmesan. It wasn't what I was expecting. It was completely pureed, and had literally no texture, very thin. The Parmesan flavour was strong, but I could not taste any vegetable...including potato. The colour of the soup was also quite unappealing. It was a very pale beige color, as was the cup it was served in. I would have liked a bit of garnish, some bright green parsley or maybe a dash of black pepper or paprika.
My sandwich could have been much better. It looked good, but there were some problems. It was served on a whole wheat hoagie bun that felt and tasted stale. After a few attempts to get the sandwich into my mouth, I set aside the top bun, and proceeded to try to eat the rest, open faced. As I was only given a soup spoon, I started carving away at the remaining sandwich. The meatloaf had good flavour, but was barely warmed. The Swiss cheese was also luke warm, and had that terrible half melted look about it. The arugula was not very peppery, and like the bun, tasted like it was not terribly fresh. The sandwich had 2 sauces, a BBQ and a grainy Dijon mayo. I preferred the taste of the mayo, as the BBQ was a tad sweet, and I don't think it complimented the arugula at all. Perhaps, reheating would have made my sandwich more yummy...but all 8 staff were very busy, so I'll never know.

I finished my glass of wine, ( Babich Sauvingnon Blanc...very reasonably priced at $7.25 per glass) and out of the corner of my eye, I spotted a very nice looking pie. I was still a bit hungry, and goodness knows, a decent pie is hard to find, so I inquired. It was a DOUBLE CRUST APPLE PIE. At that moment, sweeter words were never spoken. I ordered a piece with whipped cream, and a coffee.
This pie arrived looking like a million bucks! High and proud, firm and dry. I am not a fan of drippy, soggy apple pies...and I harbour an unnatural hatred of RAISINS. This pie was room temperature, with a firm, thin crust. The apples were tart, in that, what a surprise, the pie doesn't taste like candy, sort of way. The top was lightly sprinkled with sugar, and even the whipped cream was barely sweetened. There were no horrible raisins hiding in the filling, and I ate the whole piece...even the hated edgy crust, that is usually just a lardfest. I paused to have a sip of my coffee, and found it delicious.

This pie has restored my faith in restaurant pies...especially in the classics, like apple. I will visit the Acme Cafe again. I tasted incredible potential in that pie...
Posted by Cathy B at 11:31 AM