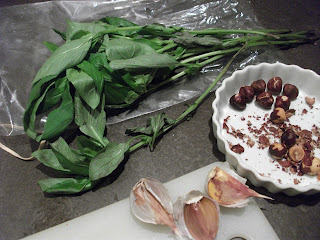 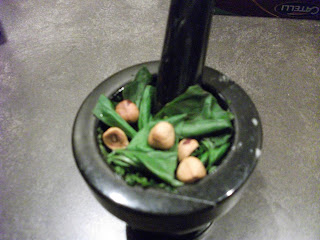 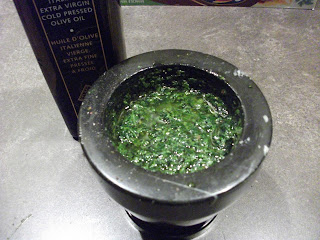 I have had a wicked case of strep throat. 10 days of antibiotics, multiple packages of sugary Neo Citran, and 9 disgustingly cherry flavoured throat lozenges later...I am feeling better. When your throat is on fire, nothing you eat is the least bit tasty. My warm morning oatmeal soothed my throat, but the milk further clogged up my few functioning taste buds. It was hell being hungry and unable to taste anything! Salvation came last Friday. My SPUD box arrived with the most vibrant green, sweet smelling bunch of basil I have seen all season. I decided to make PESTO!

It's Not EASY being green!

Lying on the couch for a week watching re-runs on the Food Network has been quite inspirational. Jamie Oliver in particular LOVES to smash things up in this gargantuan mortar and pestle. It looked easy. I was inspired! During the next commercial, I staggered into the kitchen took the bunch of basil out of the fridge, turned the oven on to toast a few hazelnuts ( I HATE pine nuts!) and peeled a large clove of garlic. When the hazelnuts turned brown, I took them out of the oven and tried to rub off their papery skins. I roughly chopped the garlic, threw a bit of everything in my mortar, and started pounding away.( I only used the basil leaves, no stems.)

In about 10 minutes I had a nice mushy mixture. I covered it with olive oil, added some salt and pepper, and had a taste. Hmmmmm...I could taste the basil, and I could really taste the garlic!Triumphant, and exhausted, I had a little nap When the P-Man arrived home, I put some pasta on to boil, and in about 15 minutes, we were sitting in front of the TV happily slurping our delicious pasta with pesto.( I added a generous grating of Parmesan before the slurping began!)

The P-Man declared it 'the best pesto he has ever had'!

The Basil-Pesto Strep Throat Cure...you heard it here!
Posted by Cathy B at 2:30 PM