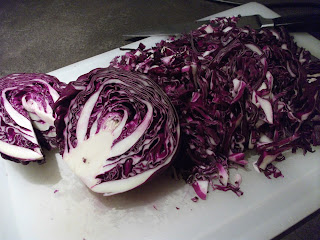 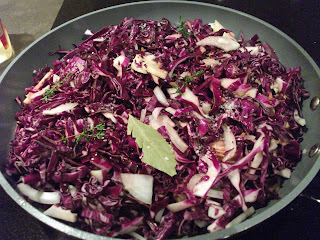 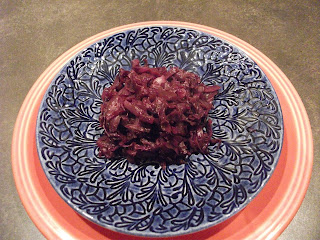 I received the most adorable little red cabbages in my SPUD box last week. As the weather has definitely switched from warmish late fall to cold early winter, I knew the cabbage recipe I was looking for had to be hot. I found this recipe at Canadian Living, and it was unusual enough from my normal braised cabbage that I thought I would share it with you. The recipe can be found at: http://www.canadianliving.com/food/braised_red_cabbage.php

As always, I made a few substitutions. Some based on the ingredients I had on hand and some based on personal taste. They are as follows:

I had no juniper berries or gin. I substituted a 1/2 cup of organic vegetable stock. As a result,when I uncovered the braise, it was quite 'liquidy', and I had to boil it for about 15 minutes longer to get the cabbage to a more dry consistency.

I used a small yellow onion, instead of a red onion.

I had no dried thyme so I substituted a bunch of fresh and picked out the thyme stems before I served the cabbage.

I have made braised cabbage before, but if I could pick one thing that made this recipe so good, it was the red wine. The wine added a depth of flavour that I really enjoyed. I am a white wine drinker, so when I first tasted the cabbage, it had a whiff of old socks. I must admit, the smell of food is something I rely on almost as much as the taste...so for a minute I thought I had ruined this huge pan full of cabbage. The taste however was decidedly' un-sock-like', and I deduced  that the red wine, veg broth and fresh thyme in combination had contributed to the aroma. The first bite was so subtle I wasn't sure I had added enough salt. The second bite let me know that the seasoning was in my opinion, perfect. It tasted earthy, and 'herby', and slightly sweet, but not like the little piles of almost 'candied' cabbage you see on plates at German schnitzel houses.

Last point: The recipe says that this recipe will keep in the fridge for 3 days. I ate this cabbage for almost a week, and it just got tastier and tastier. I will definitely make this again.

Thanks Canadian Living!
Posted by Cathy B at 11:19 AM