Night at Chambar...Dine out Vancouver 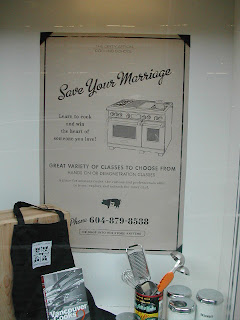 I think this picture is Hilarious!! It's a window display at the Dirty Apron Cooking School on Beatty St. in Vancouver. I saw it on my way up to Chambar restaurant. The P-Man and I were meeting some friends for dinner.

I had never been to Chambar. I had only been to it's sister restaurant, Medina.

We were eating out as part of Vancouver's annual Dine out celebration of local restaurants. It sounded like a great deal. Three courses for $38. We ended up spending a little over $160 after drinks...not including tip. I won't get into what I ate, because it was not that good. It was well presented, in a nice looking space, but I left feeling like I had never eaten. The only way I can describe it is that the food lacked substance. There were a lot of ingredients to each dish, but together, they didn't seem to work. Compared to some of the delicious things I have blogged about, that cost a fraction of the price, and delivered an eleven on a 1 to 10 taste scale, Chambar just didn't do it for me.

Perhaps the cooking school window is right. Save your marriage AND your money by learning to cook!
Posted by Cathy B at 1:37 PM