Another busy day in NYC 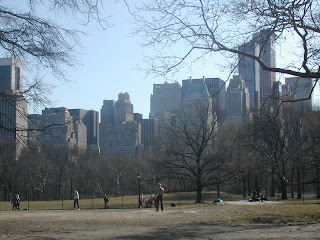 This was a photo I took yesterday, as the P-Man and I were walking through Central Park. I mean, I am a lousy photographer...and look how pretty this is. The whole city is photogenic!! Today, the weather changed, and it started to rain. I love Hotels. I don't know why, but when I am away, I love to walk through Hotel lobbies, to get a feel for the place. This morning we walked from our Hotel on 44th St to 19th St to The Ace Hotel. I have been to the Ace Hotel in Seattle, and wondered how it would translate that Northwest laid back vibe to NYC. The review I read about the hotel said that it was located in a 'transitional' neighbourhood. Everything was fine until the last 2 blocks. All of a sudden it was like we walked into the twilight zone, and we were the only white people on the street. Me with a map in hand, and a camera around my neck! Yikes! When the streetlight turned green, we crossed the last block, and walked another half block towards an awning covered with little white lights that simply said ' HOTEL'. That is another great thing about NYC...if the place is really cool. they don't bother to put up a sign...you are just supposed to know where you are. We made our way through the huge lobby, with 25 ft ceilings , and the biggest oldest American flag I have ever seen, draped up on the wall. The restaurant was called Breslin's, and looked like an old saloon, with the waitstaff dressed in jeans and sneakers and distressed t-shirts, with BRESLIN'S Ace Hotel NYC on the back. The menu was as eclectic as the setting, and the P-Man settled on curried lentils with poached eggs, and I had 2 scrambled eggs with a croissant. We both had the excellent coffee from Stumptown Roasters. My eggs came in a small ramekin, and the texture was luxuriously silky. ( I would hate to think how much butter was used!) The eggs were steamed, I think, and had chives mixed in. The croissant was almost too much, as the eggs were so rich, but the flavour of the two was so amped up, it was like breakfast on steroids! The P-Man is not a big fan of spicy food, but he said that his eggs and curried lentils combo was excellent, and said that he would walk here again, just to have them. He gave me a taste, and they were firm and nutty tasting, but with a flavourful curry flavour that was dynamite with the simple taste of the poached eggs. The group next to us was having fresh baked pastries that were served on a beautiful wooden platter that looked like a polished slab of Douglas Fir. For the hour or so I was there, I really felt as if I had come home. With the rain falling outside, and the fire roaring in the lobby, I could almost smell the Pacific Northwest.