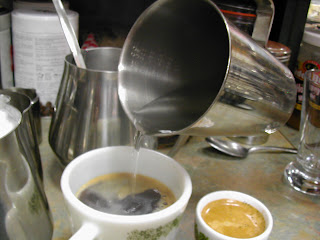 I needed some coffee this morning. Last night I went out to a local pub to meet some old friends. We were there to wish someone GOOD LUCK in their new job in the big city! I had been out for my LARGE Cactus Club lunch a few hours prior to walking down to the pub for 5 pm...so I didn't bother to eat. That was my first mistake. I had a couple of glasses of wine, and someone was nice enough to buy me another...and before you could say: " Cathy's Drunk!"...I was. Mistake number two was helping myself to some of the complimentary appies that were generously provided. I had some raw vegetables with some creamy dip, and a variety of deep fried treats such as little egg rolls,chicken wings, and zucchini sticks. Before I could finish my paper plate full of artery clogging , stomach churning goodness...some dear soul bought me ANOTHER GLASS OF WINE !! Wine was drunk, plate was cleaned, and I seem to recall something about a few more egg rolls being consumed. After all the entertainment and chatting, I glanced outside, and discovered that the sun had set. People were filing out, and the guest of honour was making his final rounds. I said my good-byes, and headed out into the night for the short 10 minute walk home. It must have been the fresh air, but I was feeling pretty good, and was hardly staggering at all! As I approached Slainte by the Pier, I noticed that there were 3 young ladies playing guitar and singing. I had no idea what time it was, but the P-Man was probably just falling asleep on the plane, so, I thought a good plan would be to walk the rest of the way home, grab my debit card, as I had spent all my cash at the pub...and come back and hear the ladies sing! Mistake number three. The ladies were great...all up and coming singer/songwriters, with CD's in the works...I hardly noticed how quickly I managed to drink another couple of glasses of wine. Have you ever seen in the movies, when the drunk person walks out of the door of the establishment, and sort of does a sideways walk right to the edge of the sidewalk, and then veers back to the middle? I did that! I tried to breathe deep, and headed up the big hill to my apartment. At this point, my stomach was starting to make some strange noises. I got in the door, took my coat off, and turned the tv on, convinced that I just needed some water and perhaps a few tums for the noises. Unfortunately, the tums and the water did not like it in my stomach, and started to fight it out with the deep fried eggrolls and the creamy dip! As this blog is supposed to be about EATING FOOD...not the opposite...I will leave the rest to your imagination. Note to the P-MAN...I obviously can not be trusted out alone on a Thursday night. Note to SELF...Drinking, and fried food, and fast walking, and tums, and water is a deadly combination. Today, I managed to have a cup of instant coffee, ( Maxwell House is what my mom and dad drank 40 years ago, and I still do!) and 3/4 of a cup of Honey Nut Cheerios, with a half cup of 1% milk. An hour or so ago, I had a huge plate of leftover spaghetti with homemade tomato/meat sauce, and everything stayed where it belonged...IN my stomach.