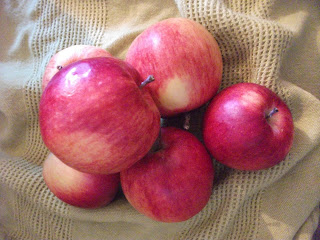 The P-Man and I made a quick trip to the Okanagan in October to have Thanksgiving dinner with his parents. The following day, we decided to leave after a late breakfast. As we were driving to the local DENNY'S...I saw a sign that said 'Farmer's Market.' After we ate, we decided to go, as it was the last market of the season. WOW!! What a bounty! It seemed as if every vendor had decided to sell everything that remained from the season. There were HUGE bags of carrots and beets, potatoes...and APPLES!! We stopped at a stall selling 35 pound boxes of apples for 6 DOLLARS!! I couldn't believe it. The smell coming from that box of apples was intoxicating. It smelled sweet,and tart, and slightly lemony. I had to have the whole box. We loaded them into the trunk, said our goodbyes, and hit the road South.

We have been eating those apples for the last 2 months! I had them in the trunk of my car for the first month, and my whole car smelled like apples! When the forecast called for frost, I helped the P-Man lug them up the hill and to our apartment. I have kept the last of them in the spare bedroom in front of the cool sliding glass door. Now my spare bedroom smells like apples! The remaining apples are starting to look a little limp. They were so good, I couldn't let them go to waste. I decided to make some applesauce.

I looked for a recipe online, as I was unsure if I needed to peel them...and if I should add lemon, or sugar, or what. I found a recipe at simply recipes, and it worked really well. The applesauce had the texture and complex fruity taste of the apples, with a touch of zip and sweetness, from the addition of cinnamon, salt, lemon, and a bit of dark brown sugar.

After about 40 minutes of simmering, the whole apartment smelled like an apple pie factory! After the mixture had cooled, I ladled the applesauce into 6 glass jars, and froze 5 of them. I intend to have some over Christmas with some festive roast and remember that sunny afternoon in Vernon.
Posted by Cathy B at 10:30 AM